TIME TO DELIVER action for the prevention and control of NCDs

In preparation for the UN High-Level Meeting on the Prevention and Control of Non-communicable Diseases (NCDs) in September, the UN held an interactive civil society hearing to provide the opportunity for global stakeholders to make suggestions and share priorities while negotiations are currently taking place over the proposed draft for a Political Declaration. 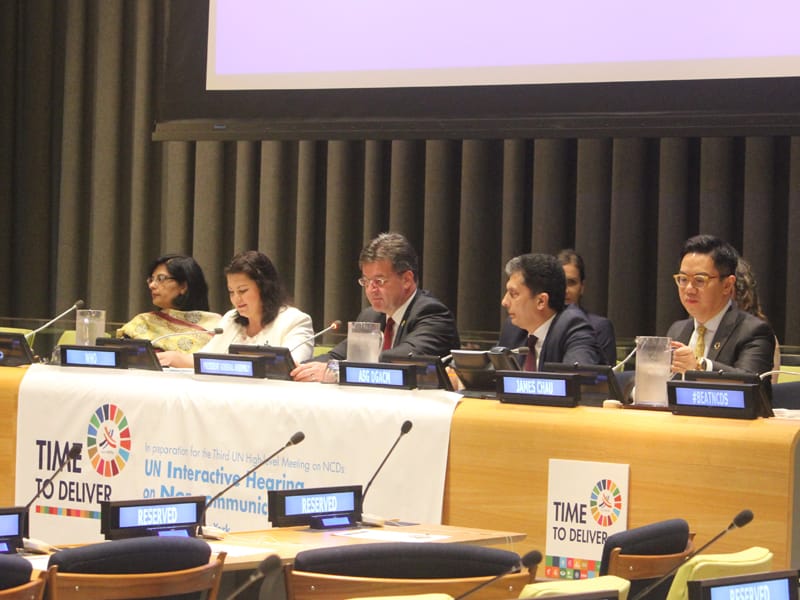 In preparation for the United Nations (UN) High-Level Meeting on the Prevention and Control of Non-communicable Diseases (NCDs) scheduled for 27 September 2018, the UN held an interactive civil society hearing on July 5 2018 to provide the opportunity for global stakeholders to make suggestions and share priorities while negotiations are currently taking place over the “Zero Draft”–the proposed draft elements paper for a Political Declaration. The President of the General Assembly, with the support of the World Health Organization, presided over the hearing with participation of senior-level representatives of Member States, observers of the General Assembly, parliamentarians, representatives of local government, relevant United Nations entities, non-governmental organizations in consultative status with the Economic and Social Council, invited civil society organizations, philanthropic foundations, academia, medical associations, the private sector and broader communities.

The WHO Independent High-Level Commission on NCDs prioritises NCDs (diabetes, cardiovascular diseases, cancers, and respiratory diseases) and their risk factors (unhealthy diet, physical inactivity, tobacco use, and harmful alcohol consumption) as well as mental health, and air pollution as a risk factor for NCDs.

The International Diabetes Federation, in attendance at the hearing, calls on leaders and health ministers of the 193 United Nations Member countries to reduce the burden of diabetes and its risk factors, including unhealthy diets and physical inactivity.

UN General Assembly President Miroslav Lajčák opened the interactive hearing and called for more efforts to control NCDs. “We are not on track for the 2030 deadlines. For the first time in history, NCDs are killing more people than infectious diseases,” he said. “NCDs are now responsible for two-thirds of all global deaths.” Opening speakers included, Dr. Svetlana Axelrod, Assistant Director-General for NCDs and Mental Health, World Health Organization (WHO); Dr. Sania Nishtar, Co-chair, WHO independent High-level Commission on NCDs, and James Chau, WHO Goodwill Ambassador for SDGs and Health who in a passionate plea for stronger advocacy asked, “Are we not all being too polite? SDG 3.4 is a citizen, customer and consumer. It is all of us. Health is a fundamental core of our human rights. NCDs are rooted in inequality.” On the matter of affordable treatment Chau asked the assembly, “Why is insulin not accessible or affordable? Why can’t we help the more than 400 million people with diabetes?”

In recent years, awareness of the NCDs crisis has been growing with the UN and WHO calling for action on the issue in several international forums. The UN high-level meeting on NCDs in 2011 resulted in a Political Declaration, in which multiple commitments were made for the prevention and management of NCDs by countries, and multilateral and donor agencies. WHO member states agreed to a 25% reduction in premature NCD mortality by 2025. In 2014, Member States adopted an Outcome Document of the UN General Assembly, which included four time-bound commitments using 10 progress indicators for implementation in 2016-2017. Unfortunately, progress towards fulfilling commitments has been disappointing with 83 countries having made poor or no progress. In 2015, countries agreed to the “SDG target 3 – “to ensure healthy lives and general well-being” with a specific NCD target: a one-third reduction of premature NCD mortality by 2030 through prevention and treatment of NCDs and the promotion of mental health and well-being (SDG 3.4). SDB target 3b calls for support for research and development of, and provide access to vaccines and medicines that primarily affect developing countries. Countries made an additional commitment to act on nutrition and unhealthy diets, including actions to reduce the consumption of sugars, sodium and fats. In summary, it is widely accepted by the Independent High-level Commission on NCDs that unless there is a serious change in approach and more action, SDG 3.4 will not be attained, adversely affecting the health of future generations. Obstacles for many proven interventions for NCDs include: lack of political will, commitment, capacity and action; lack of policies and plans for NCDs; and the impact of economic, commercial and market factors.

“Are we not all being too polite? Health is a fundamental core of our human rights. NCDs are rooted in inequality.” James Chau, WHO Goodwill Ambassador for SDGs.

Dr. Chamari Warnapura, Deputy Medical Director, National Diabetes Centre for the Diabetes Association of Sri Lanka, was an invited speaker on the prevention and control of diabetes. Dr. Warnapura emphasized the need for implementing ‘Best Buys’ on diabetes by 2020. “Best Buys” cover six policy areas: tobacco use, harmful use of alcohol; unhealthy diet; physical inactivity; management of cardiovascular disease and diabetes; and the management of cancer. In her address, she said, “When it comes to ‘Best Buys’, we need to consider focusing on primary prevention as it is the most effective way to reduce the disease burden of diabetes globally. This incorporates interventions to reduce unhealthy diets to overcome obesity at all ages especially in childhood, increase physical activity due to current sedentary lifestyles, reduction of stress and harmful use of tobacco and alcohol which are all main risk factors of diabetes and other NCDs.” One such intervention that Dr. Warnapura, other invited speakers and stakeholders strongly advocated is a tax on Sugar Sweetened Beverages (SSBs). “Absence of tax on sugar is a major drawback. Deaths due to diabetes equal that of tobacco as indicated in the DASL awareness campaign #1every6seconds which was the basis of the IDF Framework on Sugar in May 2016.” An SSB tax is implemented in Sri Lanka.

Dr. Warnapura also focused on secondary prevention, the need for early detection, strategies to prevent diabetes complications and management of stress. “Accessibility, affordability and availability to essential medicine and quality care should be based on best practices formulated on evidence based research,” she said.

The final session of the day focused on political leadership and accountability with a strong emphasis on the need for driving and implementing national NCDs policies to reach the SDG target 3.4 by 2030. Panel speaker, Dr. Llona Kickbusch, Director of the Global Health Institute, declared, “Health is a political choice. The present Zero Draft doesn’t express the willingness to act ambitiously enough. It doesn’t include any reference to real world pressures and real world conflicts as we deal with the largest and most influential industries in the world who put pressure on politicians and governments. They are part of investor gains, and part of the unhealthy products that go into our body. We need a strong declaration!”

Spread the word on social media using the hashtag #beatNCDs

Make your voice heard and urge governments, the private sector and other those who play major roles in promoting health and reducing noncommunicable diseases (NCDs) to meet commitments to reduce premature deaths from NCDs by 25% by 2025 and, in line with the Agenda for Sustainable Development, one-third by 2030. #BeatNCDs 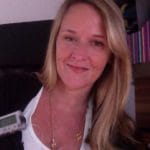