Half the town has diabetes, yet there’s hope

The land of the Alyawarr people in central Australia has become the unlikely ground zero in the global diabetes fight. 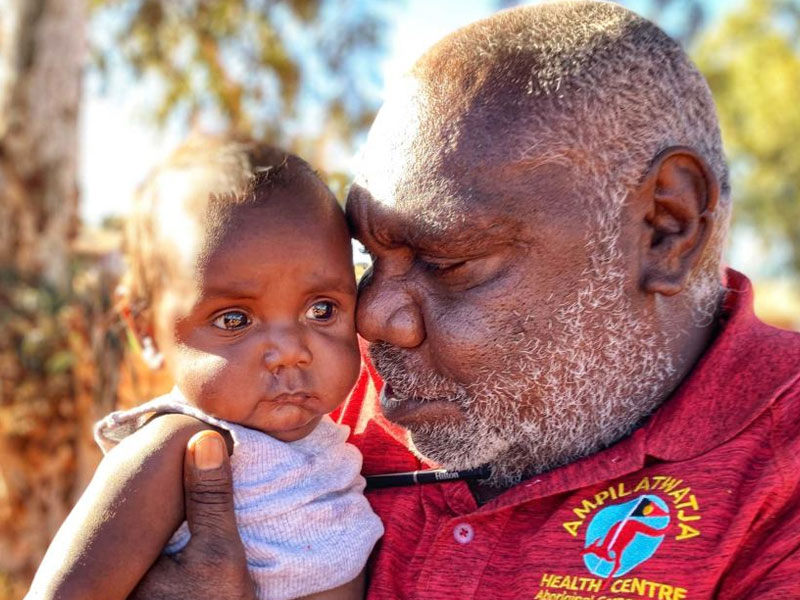 PHOTO: Nigel Morton and half of his town's 500 residents have diabetes. (ABC News: Chris Kimball)

Remote, rubbish-strewn red dirt with crowds of feral dogs and donkeys. A few dozen houses in a sea of desert mulga scrub, where modern life meets lore and tradition. Half the town has diabetes, yet there’s hope.  Welcome to Ampilatwatja, population 500, a village burdened with type 2 diabetes, which can lead to amputated limbs, poor life expectancy and end-stage kidney disease requiring dialysis. Rates of diabetes are many times higher in Indigenous than in non-Indigenous Australians.

“Fifty per cent of the people here have diabetes, even between 12 and 15, the younger ages,” said Nigel Morton, himself a type 2 patient.  He is the elder responsible for traditional lore, including initiation and retribution. He is also the chair of the local health service that is battling rates of chronic diseases which some describe as among “the worst in the world”.

“I got it at an older age. It’s sad to see it in my people,” said Mr Morton. “The data is showing since the early ’80s, the chronic diseases came in and really hit our families, especially diabetes and heart issues.”

‘We are losing a lot of families’

Like in many remote communities, every family in Ampilatwatja has felt the pain of diabetes, including Mr Morton’s brother-in-law, Douglas Pick Julama.

“We are losing a lot of families through diabetes. It’s important to look after ourselves, our bodies,” Mr Pick said. “My son had a heart problem too. He passed away last year, my biggest son. He was 25.

“Even my sister last week passed away. I call her my sister, she passed away. She was on dialysis in Alice Springs but she’s gone now.”

The causes can be misunderstood

Neale Cohen, a diabetes specialist from the Baker Institute, has been working with the community for more than a decade, running clinics and trialling diabetes treatment approaches.  In that time, he has seen patients as young as seven with the disease.  Cohen said the rates of diabetes here were among the “worst in the world”. His work is about improving health outcomes but also challenging stigmas about the causes of the disease.

He said it was a widely held view that Indigenous Australians in remote communities suffered high rates of diabetes due to lifestyle issues like diet choices and a lack of exercise, but that was far from the full story.

First Nations people across the globe were genetically predisposed to developing the disease, he said.

“Blaming the victim is common and perhaps makes us feel more easy about things. Indigenous peoples are very vulnerable to diabetes — we see this around the world, we’ve seen it in American Indian populations, we’ve seen Middle Eastern populations, some of the Asian groups, we see African populations who are more prone.  Although we like to blame lifestyle, the truth is there’s a really, really strong genetic component. There are elite athletes like Cathy Freeman who have type 2 diabetes. Now, Cathy has done nothing to deserve that, she just simply has a genetic profile.”

Curse of the ‘thrifty gene’

Cohen said the genetic predisposition related to what was known as the thrifty gene, but it’s a theory some researchers have challenged. The hypothesis is that the gene is designed to make people metabolically safe in conditions of starvation or when food is only available seasonally or if they need to travel a long way to access it.

“They efficiently metabolise and store fat,” Associate Professor Cohen said. “And so, if you put such a population into a situation where there is ample food and there’s not much exercise, as is the modern world, then these populations develop very rapidly metabolic disturbances such as obesity and diabetes.”

Dr Chris Matthews, who runs clinics in Ampilatwatja, has seen similar rates of type 2 diabetes working with Bedouin people in remote areas of the Middle East.  He’s also frustrated by the stigmas associated with Indigenous diabetes. “The average person in metropolitan Australia would have no idea of the circumstances of people out here in the bush,” he said.  “The people in the community that I see think about just survival, things like financial issues and social things, rather than illnesses being kind of high priority.”

‘All this living culture could be lost’

The front line of medical care in Ampilatwatja, and for the many surrounding outstations, is a new $3.8-million health centre that opened in April amid calls for greater support to deal with the growing rates of chronic illness and out-of-hours care for which the clinic receives no funding.

Clinic manager Rachael Ashley-Butler sees the personal toll of diseases like diabetes and the blame and shame that comes with it.

“We don’t have McDonald’s, we don’t have Pizza Hut, we don’t have a pub out here,” she said.  “Our choices are limited to what is in the store, which is trying its best to provide better options, but the Aboriginal chemistry seems to be more inclined towards diabetes.  We should not be punished just for who we were born as. The reality is that sometimes who we are born as means we’re more likely to get an illness.

Many generations of desert lore and traditional healing are proving helpless against diseases like diabetes. The eventual result of diabetes can be a life spent in a dialysis chair where, every few days, patients are hooked up to a machine that filters their blood, replicating the function of failed kidneys. The new health centre has four dialysis chairs run by The Purple House, which has had remarkable success in helping establish in-community dialysis in the Northern Territory, meaning people can stay at home, on their land, while being treated.  The new services are helping keep families together, but Cohen describes dialysis as “a bandaid”, the last-resort treatment for a growing problem.

“It’s fantastic to have a dialysis centre here, of course, because of the really high rates that we have, but unfortunately every patient is a failure,” he said.

Dr Matthews agrees. There are 18 people in the town on dialysis with end-stage kidney disease.

“This is palliative care. It’s not curative,” he said.

Global implications of a diabetes trial

Dialysis is draining, both on patients and the health system. It’s expensive and labour intensive. Much of Cohen’s work is about novel treatment approaches designed to try to reduce the ever-growing queue to the dialysis chair.

“I think there’s an urgent need in diabetes to put some serious resources into these communities to stop the progression of the illness,” he said.  “We’ve done some research that’s shown this is possible with slightly different models of care, slightly different therapies, and more intensive therapies.”

That’s the summary of a trial his team recently completed that could have implications for First Nations people worldwide.

“Clinical research is the centrepiece of this. You need to get the evidence to prove that you can make a difference,” he said. “There are some wonderful new treatments that we have that not only are good at lowering glucose, but they protect the heart and kidney.

An injection of hope

It took almost two years to complete the trial, which involved 38 remote patients. Few such studies have been completed due to the isolated nature of the patients and the lack of medical understanding in the community. It’s hoped the results will pave the way for large-scale clinical trials that could reshape the way diabetes is treated in remote areas.  The findings will be presented at the annual Australian Diabetes Conference in Sydney and then published.

Ms Ashley-Butler has seen the effect of the treatment approach, which replaces daily insulin injections with a once-a-week injection and other clinical support.

“We’ve immediately gone from up to 42 sticks with needles and finger sticking in a week to just one,” she said. “We are getting amazing results. I’ve got data showing that the [blood sugar counts] are coming down and everything’s about the numbers.

``I think there's an urgent need in diabetes to put some serious resources into these communities to stop the progression of the illness.`` Associate Professor Neale Cohen

Despite the study results and a decade of building relationships in the community, there is no guarantee of ongoing support for the work of the Baker Institute and Neale Cohen in Ampilatwatja. Frustrations about funding for remote health are all too familiar for David Smith, the chief executive of the town’s health centre.

“There is a big difference between urban and remote,” he said. “We’re still traditional hunters and gatherers, living off the earth, off Mother Nature. We also have a very strong connection to the land and I think people need to come out here to see that. We lack the funding to be able to do our job correctly. We are grateful to the Department of Health for allowing us to build this beautiful clinic. What we will advocate strongly for is that we need more funding in order to staff it, to look after the sick patients that we have out here in our community.”

‘We get back our soul’

Mr Smith, an Indigenous man who has spent his career in primary health, said Australia had much to gain from making a difference in the health of First Nations people.

“What we get back as Australia is an identity, is our place on the world map as far as history goes, because we are sharing a continent with people that have been here before us, you know, as far as a Westernised civilisation,” he said.  “So, what do we really get back?  Yeah, we get back our soul.”

Thank you to Chris Kimball and ABC news for giving Diabetes Voice the opportunity to reprint an abridged version of their story.  The original article appears here.

Preventing obesity and type 2 diabetes: time to hand on the baton

Type 2 diabetes and its impact on sleep